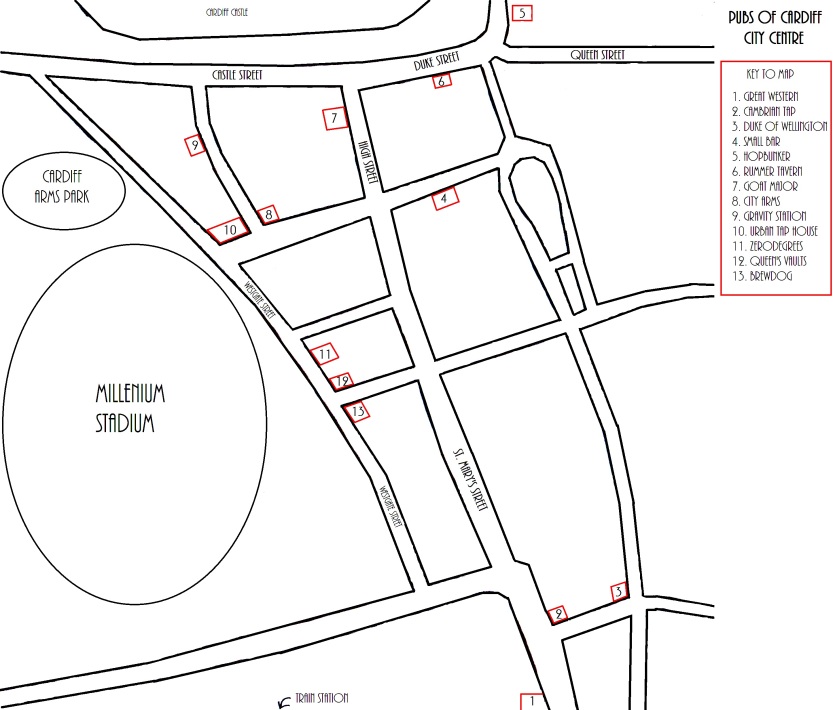 Over the summer, Barry asked me about the pubs of Cardiff and recommendations for places to go when he was in town and I wasn’t around. I scribbled a brief map and some notes down for him, so I thought it would be worth tidying up the map and sharing the notes here.

Focussing on the city centre, Cardiff is a good place for a day or weekend’s drinking. With its tightly packed and pedestrianised centre, it’s an easy place to navigate and stumble from pub to pub without having to wander too far. There’s a decent blend of the traditional and modern to appease drinkers of all stripes.

The below pubs are listed not in order of greatness, but in a suggested circuit you might want to try if you’re in Cardiff. It’s easy to see how anyone can step off the train, do a boozy crawl of the city, hit ten or so pubs, stop off for chips, and then be back on the train all in a day.

(Pubs denoted f serve food. Pubs denoted * are highly recommended, for those on a tight schedule.)

The Great Western: A Spoon’s it may be, but it’s the closest pub to the train station and a suitable eating hole to load up on ballast ahead of a full day’s drinking.

Cambrian Tap: The Brain’s Brewery Craft Tap. Small, intimate venue. Their prices were once eye-watering but they seem to have levelled off. Often has an interesting range on tap and is the best place to sample the Brain’s craft beers.

Duke of Wellington: A more traditional styled Brain’s pub, the Duke has benefitted from a recent refurbishment. Cosy, intimate and lively, the cask range is typically limited to Rev James, Brain’s and the latest Brain’s craft offering.

Small Bar: Cardiff’s newest craft outlet, the largest serve is 2/3rds of a pint (hence Small Bar I suppose). Too early to say much more on this new arrival but it has met with general approval so far. The cask sinks in the toilets are an interesting feature; do not piss in them.

Hopbunker: Hopcraft Brewery’s tap house; built in an underground bunker which is impervious to phone signal and nuclear attack. Ideal venue for hiding from the wife or waiting out the apocalypse. Very large choice of cask and keg and all very reasonably priced. The cask urinals in the gents are an interesting feature; do not wash your hands in them.

Rummer Tavern: Fashioned like a Tudor hermit’s cave, the Rummer is cheap and cheerful on the food and drink front. It’s not the best at anything but is still somehow a warm favourite.

Goat Major: Decked out like the House of Commons; a decent Brain’s pub that will hopefully be next in line for a refurbishment. The cask range on offer is small and usually limited to Brain’s beers. Check out the amazing pies.

City Arms: Very traditional looking pub with a fantastic rage of well-kept beers and ciders. One of the city’s finest ale houses.

Gravity Station: The new Gravity Station on Womanby Street above the Full Moon is now larger and offers more comfortable seating than its predecessor. The famous copper table is worth seeing. Bottles and cans for take-away make this one of the best places to buy beer for the train journey home.

ZeroDegrees: Chrome and glass décor gives this place a cool, clean and sterile look; they brew their own beers on site with a focus on Continental styles. Regular beers are often joined by seasonal specials. The pizzas are made in their own fired pizza oven and the kilo mussel pots are great. Take-away beers and mini-kegs also available.

BrewDog: Good sized BrewDog with a vast range of keg and bottled beers; board games available upstairs and games machines downstairs. Pricey though.

Queen’s Vaults: Cheap cask and cheap good in a traditional pub surrounding; a lively pub with three pool tables, darts board, games machines and jukebox. Good for rowdy mobs, not ideal for a quiet sup or the connoisseur. Beers can be a bit sharp on occasion.